Sensors for soil and water

This page compiles examples of sensors for soil and water monitoring, developed during the GROW project.

A note about versions

The following research has been funded by the Grow Observatory project under European Community’s H2020 Programme under Grant Agreement No. 690199. 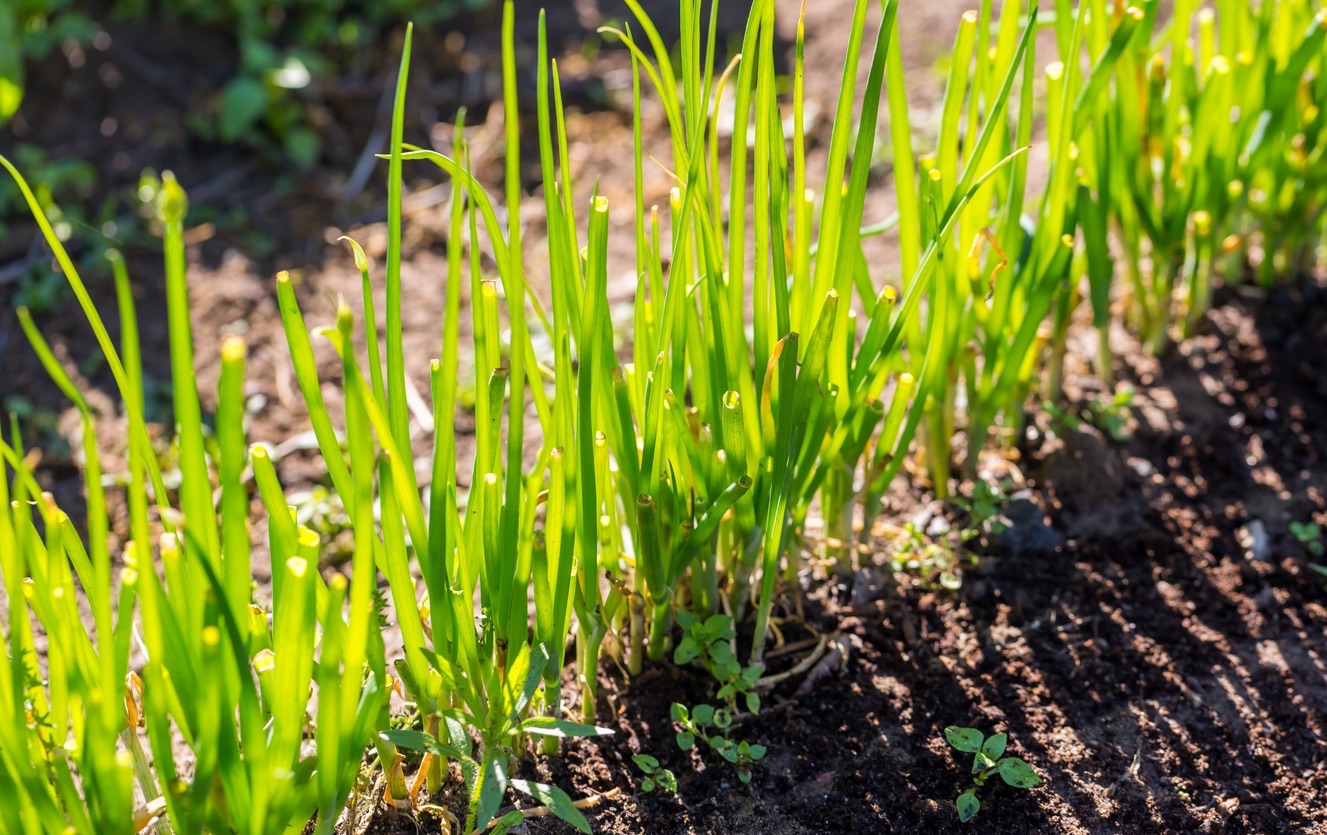 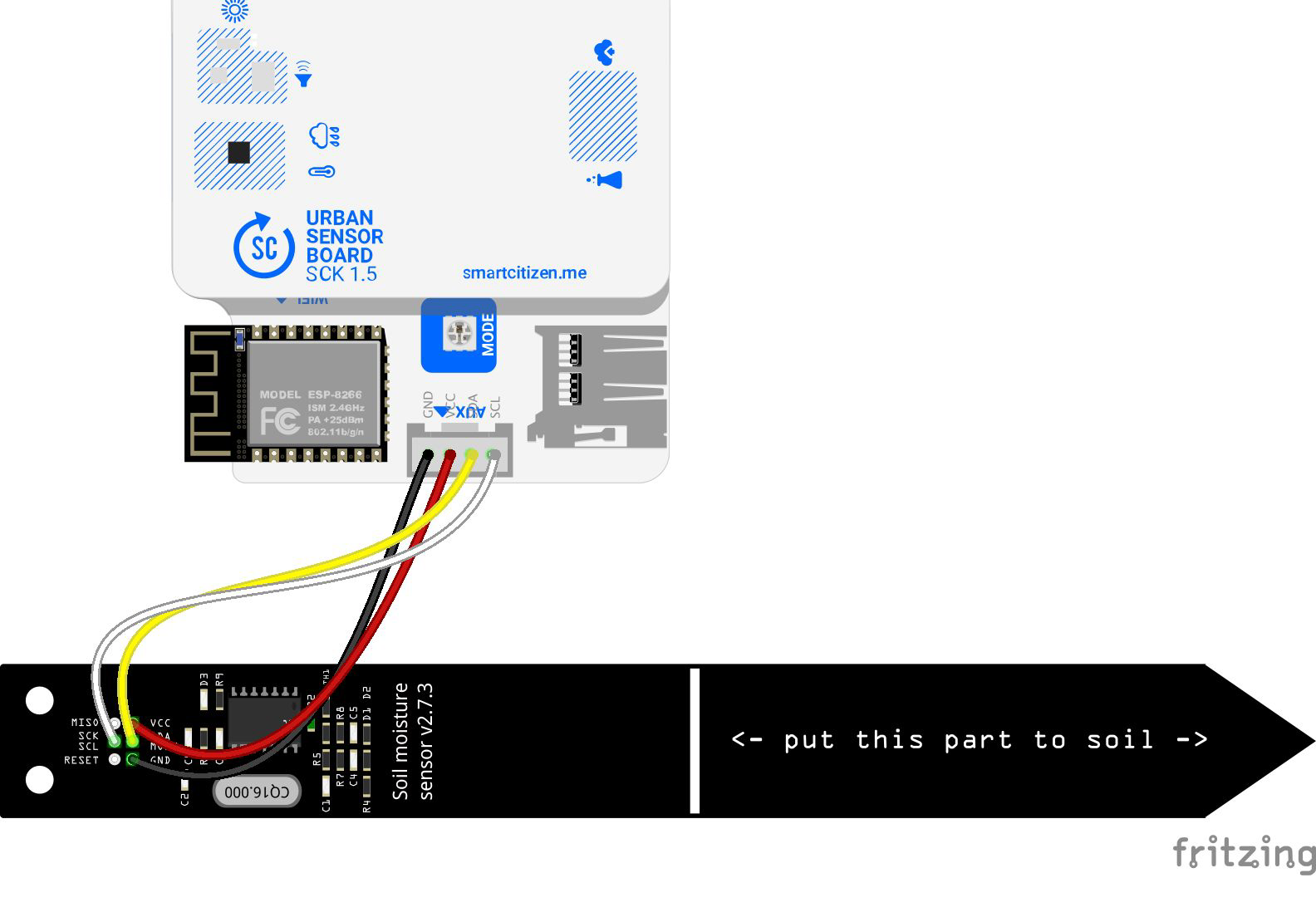 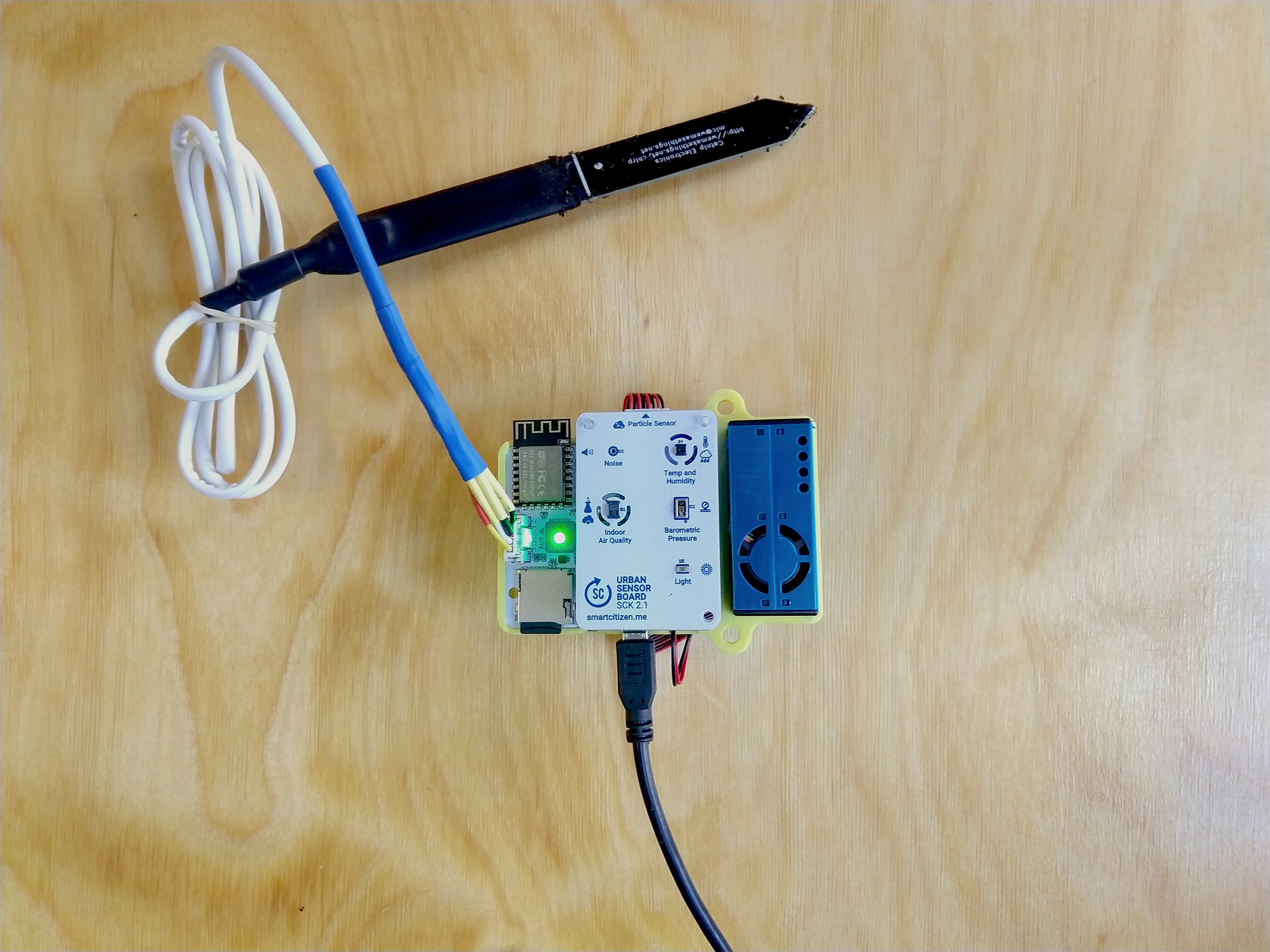 The soil moisture sensor can be used for schedule irrigations (i.e. determine when to water the plants); or for calculating soil water deficit to work out how much water to apply. Depending on the application, the sensor would need to be calibrated in with different procedures, but as a general guideline, we need to normalise its readings. Without this process, the raw sensor readings will be meaningless to the user and only some trends could be analysed. This section is a digest of some of these procedures, and more information is given in the notes below.

In case of irrigation scheduling, it is generally sufficient to simply match the raw readings from each sensor at both 0% (held in air) and 100% water levels (submerged in water). This is, of course, an approximation and will need some further analysis from the user to determine when to irrigate. When a more accurate measurement is required, the sensor needs to be calibrated with the actual soil where it's going to be deployed, since different types of soil will have different capacities. A valid approach is to prepare different samples of the soil with different levels of saturation, and adapt the sensor readings for it. 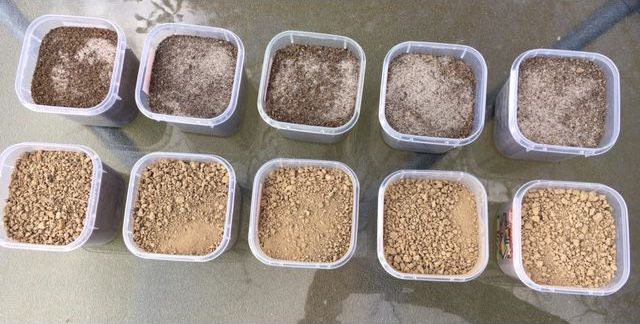 If we are not aiming to get a full-fledged sensor reading, we will only need to measure the sensor in dry air and fully submerged in water. For that, we will use:

The sensor can be calibrated using the shell interface. The process is as follows: 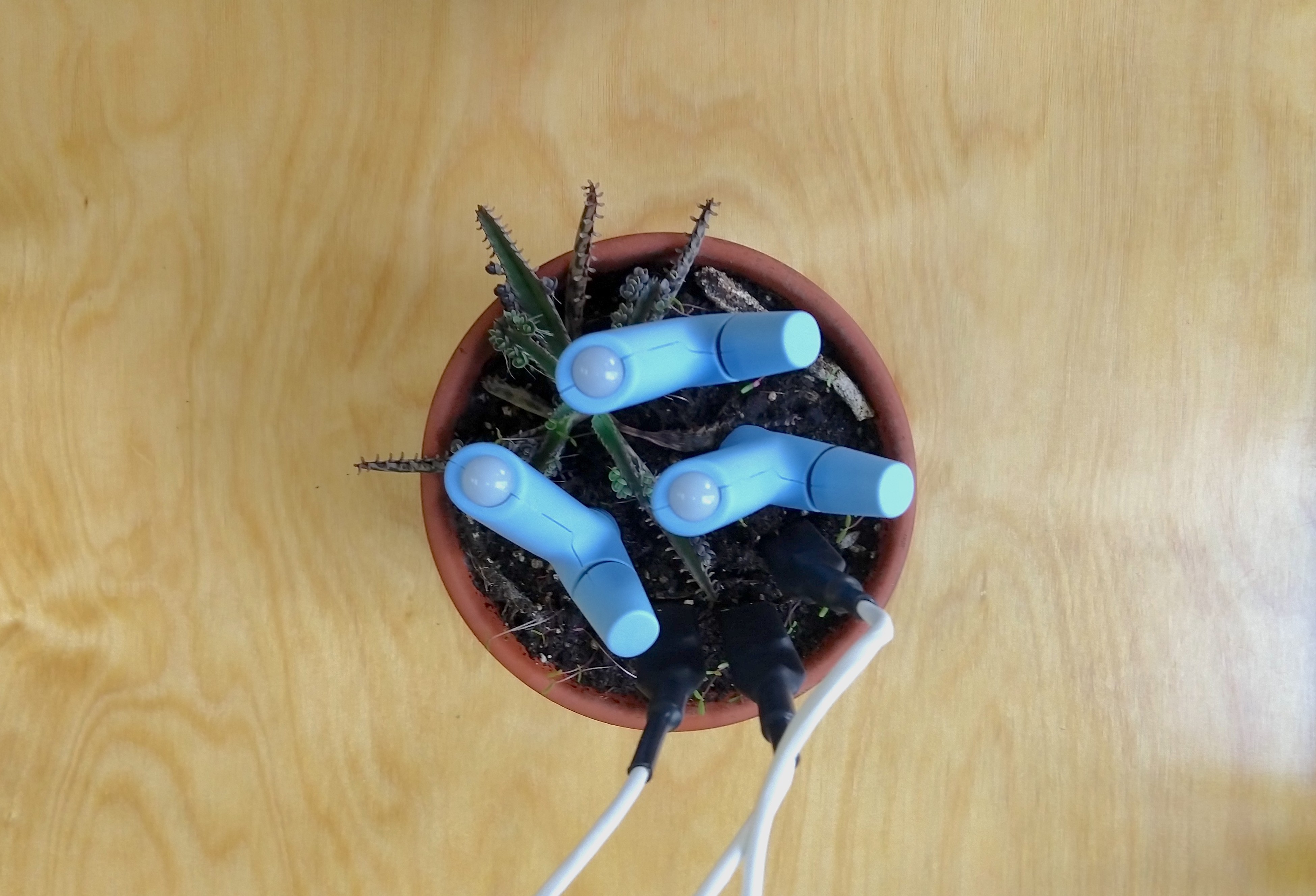 Having a robust portfolio of the sensor for measuring soil and water characteristics is a need found by many farming communities, primarily when they are working on new ways of growing crops. In this direction, we include a collection of sensors that despite not being low cost or open source, they are still affordable and well documented when compared to other commercial solution. From a cost perspective, they are not aimed at being massively deployed but instead used individually in a specific site for specific needs. 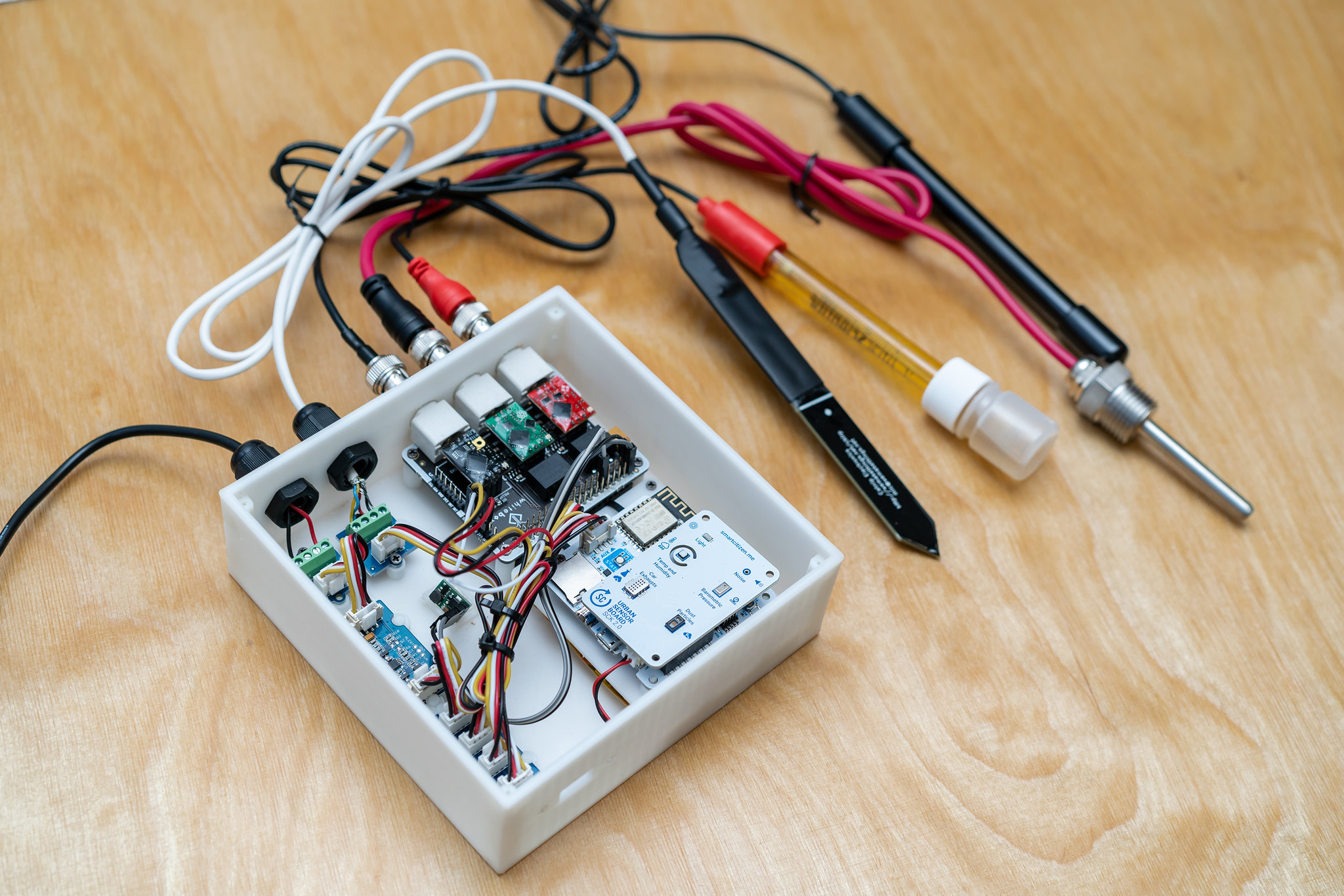 The sensors selected are from Atlas Scientific, a New York-based company that converts devices that were originally designed to be used by humans into devices that are specifically designed to be used by robots. As already mentioned the sensors are not entirely open source as the other sensors documented on this section. However, they are modular and exceptionally well documented by the manufacturer. That includes documentation on how to install, calibrate and integrate them with additional existing hardware. In this direction, we developed a full library for the SCK to support the sensors via the Auxiliary sensor connector. We also developed a Python script to simplify the calibration process of the sensors. As the sensors can be configured in different ways, we do not provide a full step-by-step guide. Instead, we refer to the documentation on the project's repository.

The setup is built out of the following main components:

Different sensor probes can be selected for different needs. For example the setup shown above is designed for soil measurements and includes Atlas Scientific temperature, conductivity and PH probes. It also consists of a Chirp Moisture Sensor as described in the above section. As an additional example the setup in the figure below is designed for water monitoring on aquaponics systems and includes Atlas Scientific probes for PH, conductivity and dissolved oxygen. 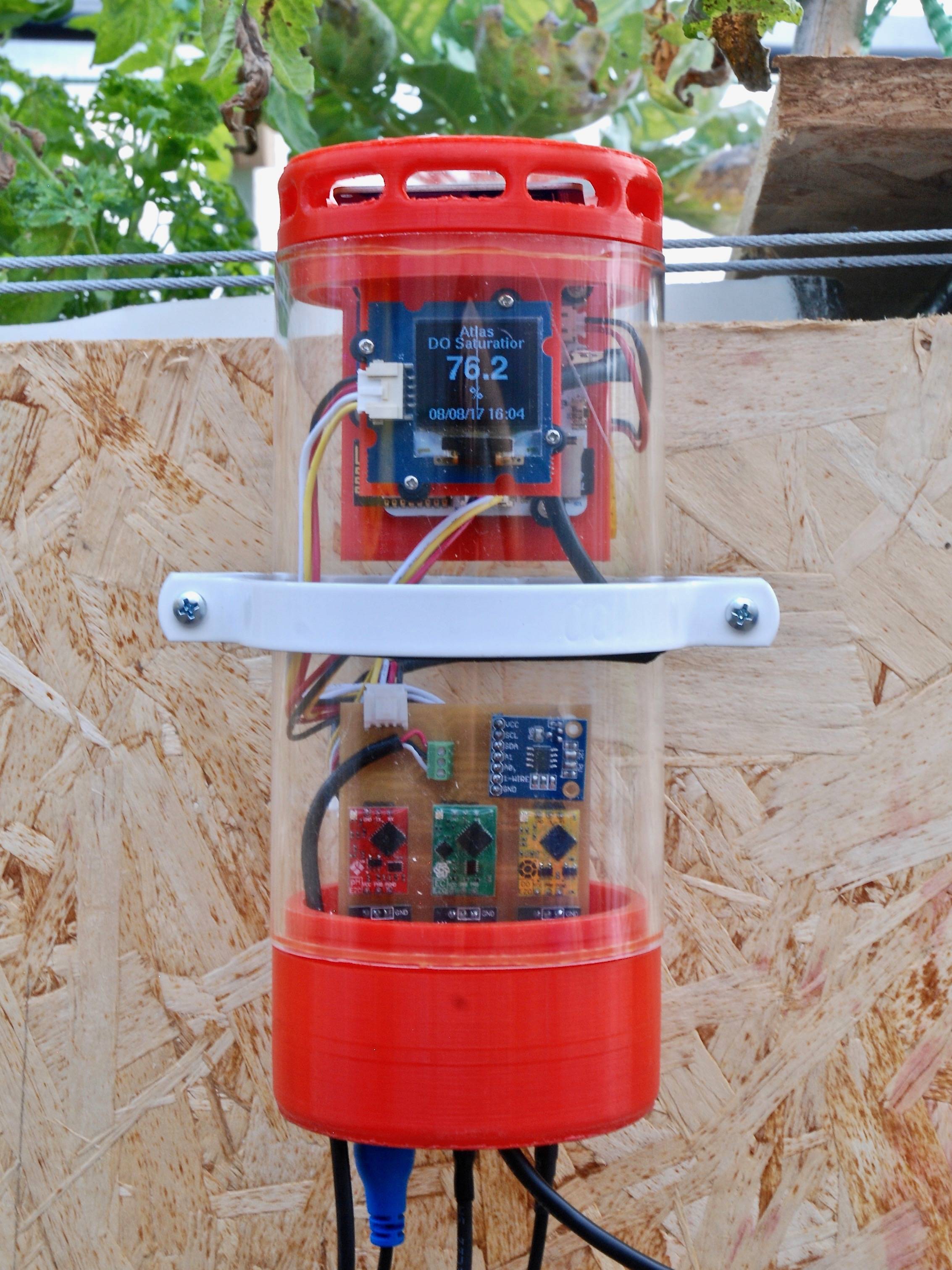 A list of the sensors available is shown below:

This version is a WIP but is not fully functional with the SCK 2.1. It is shown here as a demosntrator of the project's capabilities. Have a look at the forum or drop us an email to discuss this.

Soil Moisture data as the one provided by the Chirp Moisture Sensor is interesting for research, but when it comes to crops irrigation management, we usually like to know the soil water tension (SWT). That is because Soil Moisture in water is not directly related to the water plants roots might be able to extract because it is deeply affected by the soil composition. Even soil irrigation can be inferred from soil moisture when the soil type is known we think a soil tensiometer. Also when it is a simple solution, it is a useful tool for crops management.

The design is entirely open source and it is deeply inspired by the work of Reinier Van der Lee from the Vinduino project, using an already calibrated commercial probe like the Watermark 200SS9. The sensor itself is straightforward and it consists of two stainless steel screws that work as electrodes cast inside a piece of plaster and covered by a plastic mesh to prevent erosion. As water is added more electrons can pass between the electrodes of the probe reducing the amount of resistance between them. By using this range of values, you can determine the amount of water that exists in your soil. To avoid interferences and degradation of the electrodes the design only applies voltage for a very short time and uses alternating electric polarities. For the sensor to work, we need a minimal circuit that uses two resistors and two diodes. The resistors work together with the electrodes to build a voltage divider. We can calculate the resistance value between the two electrodes by knowing the value of the resistors and the voltage. However to be able to alternate the electric current we need to duplicate the circuit and add two diodes. In total, we need 4 Pins to be connected to a microcontroller like the Arduino or the Smart Citizen Kit.